Catalog No: SC087
Label: Secretly Canadian
Anyone who's followed June Panic's body of work over the past decade has had the interesting opportunity to chart the path of a thinking man gone sacred. Early works were Bowie-esque pop albums made with a Homestead-like DIY aesthetic. Then came his opus Horror Vacui (2000), a blissed-out documentation of the epiphany and the ecstasy of a man in the process of surrendering to a higher power that had previously been unknown to him. Last year's Baby's Breadth was a more sober affair - a meditation on rebirth featuring the same central character. His latest, Hope You Fail Better, continues the story of Panic's "hero". Thematically, it comes after the after-glow of Baby's Breadth. The uncharacteristic optimism and fresh perspective on life which characterized June's previous works is gone, as it's obvious June has finally stepped out from the warm indoors and realized that he lives in Grand Forks, North Dakota. To make Hope You Fail Better, June enlisted Daniel Smith as producer/guru and as his band he chose players with whom he's been playing for over a decade from his home of Grand Forks, eye of the '97 flood. Nothing was sacrificed in terms of the playfulness and freshness of production for which Smith has become well-known as primary songwriter and brain-child behind his band the Danielson Famile. On the album, June's written word is still in philosophy-speak, his melodies are still haunting, and his trademark vocals - about which he's previously remarked that he sometimes finds himself "singing in harmony with god, while most people hear this as an off-key whine" - have never sounded better. At this juncture, while looking at June's body of work, one could likely draw comparisons to that of mid-period Dylan (from motorbike wreck to Christian rebirth).
read more 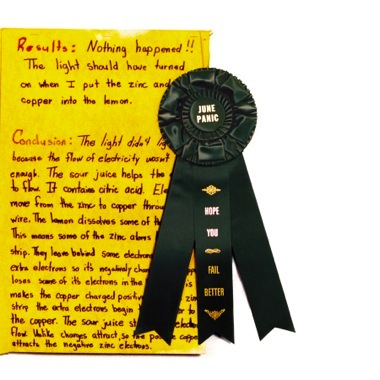