Catalog No: JAG099
Label: Jagjaguwar
Think Can or Faust all mashed up with the personal disco of Arthur Russell. Think of the electric organ of Terry Riley's Shri Camel, slowly morphing and perpetually in motion, but remaining in step with a guitar-less and Moroder-charged Sparks. And think of a more composed Dead C, where Michael Morley sings about Big Thunder Mountain while holding a beach ball in one hand and fending off the digital shards of musique concrÃ¨te humming around his ears with the other. Alex Delivery have gleefully exposed their myriad gifts and influences with their debut full-length Star Destroyer, almost two years in the making. On it the New York-based quintet have demonstrated their penchant for the electro-organic, seamlessly blending the sharp and gentle, like a chain-gang draped in organza. You can hear the chattering of insects resonating from the inside of a kettle drum, and you can imagine this colossal robo-beast wobbling and waltzing down an abandoned carnival boardwalk. Sylphs soar across strings, occasionally descending to enjoy some wiggle-worthy poly-rhythms. These and many more colorful characters have climbed aboard the Star Destroyer. Alex Delivery is Nik Bozic, Marika Kandelaki, Robert Lombardo, Colin Ryan, and Yegang Yoo. Star Destroyer was self-recorded and mixed by the band and mastered at West West Side with Alan Douches. The album artwork is taken from six oil paintings made by Kandelaki.
read more 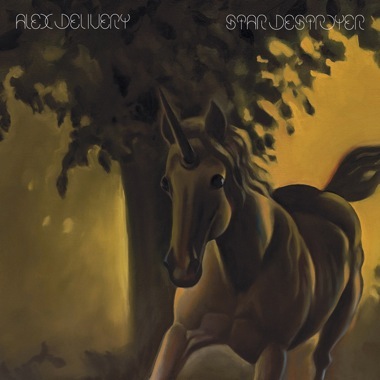