Like the land in between its far-flung borders, music in Texas covers a lot of ground. Beyonce and ZZ Top, Stevie Ray Vaughan and the Geto Boys—though often stereotyped with one certain style, the Lone Star state has produced a stunning range of sounds and approaches.

Two of the acts boldly leading Texas music into the future have now delivered a second chapter of their groundbreaking collaboration, further extending the region’s sonic possibilities. Singer/songwriter Leon Bridges, from Ft. Worth, and trailblazing Houston trio Khruangbin have joined forces for the Texas Moon EP, a follow-up to 2020’s acclaimed Texas Sun project. While the five new songs are clearly a continuation of the first EP, they also have an identity all their own—Bridges calls it “more introspective,” while Khruangbin bassist Laura Lee says it “feels more night time.”

On paper, it’s not necessarily the most obvious pairing. Grammy winner Bridges is deeply rooted in the soul tradition, with a strong feel for music from country to the newest hip-hop. Khruangbin—a mostly instrumental trio made up of Lee, Mark Speer on guitar, and Donald “DJ” Johnson on drums—draws from such far-flung influences as 1960's Thai funk, dub reggae, surf rock, and Middle Eastern soul to create an atmospheric, mesmerizing sonic universe.

But they discovered a sense of shared inspiration and sensibility, which they credit to their mutual home state, the one that gets shouted out in the EPs’ titles. “I think we’re redefining how people perceive Texas music—that beautiful marriage of country and R&B—and really paying homage to that,” says Bridges. “They’re from Houston, so they’re aware of the whole chopped ‘n’ screwed thing, and I gravitated to that growing up as well. And when I picked up a guitar, I began to discover Townes Van Zandt and Willie Nelson and that side of it. The writing is a reflection of a lot of those things.”

“Texas music isn’t just one thing,” says Speer, “it’s a lot of things, and I’m actively trying to put all the influences we had growing up into the music because that’s what Texas sounds like to me”

Bridges and the members of Khruangbin had actually never met when they set out on tour together in 2018. Not that they had much chance—both had been on the road nonstop behind their sophomore albums when their paths converged for a cross-country run of shows. But as soon as they connected, sparks started to fly. Khruangbin noticed that during their soundchecks, Bridges would stand on the side of the stage and freestyle melodies over their grooves.

Picking up on his interest, Lee sent Bridges one of the group’s unreleased recordings, and by the next day, he had sent it back with lyrics added. “There it was,” says Lee. “We don’t like to sing, here’s an amazingly talented voice. Boom!”

After that initial back-and-forth, they sat down and quickly bashed out another composition together—the simmering, sexy “B Side,” one of the highlights of Texas Moon. “We were all in a semi-circle and Leon was just kinda humming, singing little things,” says Johnson. “Some of that leaked into the drum mics, and you can still hear some of that original scatting. It’s so vibe-y.”

“That was a magic moment,” says Lee. “It was the type of session that fans think it’s always like—and it never happens like that, but it did for that song.”

From there, the collaboration flourished. Following the tour, Bridges started sending the group simple acoustic demos, some of them dating back to his earliest songwriting efforts that had never seen light of day. “I was totally impressed by how they took some of my ideas, just me strumming a guitar, and created this world,” he says. “There’s a lot of aspects of my songwriting that are a little unorthodox. I don’t like to chase formulas, and there’s a lot of moments in this EP where there isn’t that big vocal chorus moment, or maybe isn’t even a chorus at all. Normally, the producer might be like, ‘That’s great, but how about we do it this other way?’ With them, I had the freedom to do my thing.”

For Khruangbin, it was a major shift simply to be working with an actual lead singer. “All our vocals up to that point were sung in a group and really tucked in the mix, really anti-lead vocals,” says Johnson. “So bringing in that texture was quite an adjustment, figuring out how to fit that in the context of what we were doing.”

When Texas Sun was released, AllMusic called the results “intoxicating” and Paste noted that “their talents and character go together so well.” Now comes the next stage—a set of songs that touch on themes like love, faith, and death while exploring new dimensions of inventive, hypnotic grooves.

Lee notes the musical growth in the partnership from one EP to the next. “At first, I was kind of scared playing around Leon—it took me a minute to figure out how to still have my melodic footprint around his.” The new set’s slinky, longing final track, “Mariella,” represents her increased confidence. “I found much more of my own voice. My bass line on ‘Mariella’ feels so much more like me, and it’s my favorite contribution to this process.”

They all point to the spare, incantatory love song “Chocolate Hills”—one of the most recent recordings for Texas Moon—as a breakthrough in their work together. “What I love about that one is how we went with a bare-bones approach,” says Bridges. “There’s a time and place for big production, but I love how stripped down it is.”


All of the musicians bring up the sense of liberation and possibility that they felt in the Texas Sun/Texas Moon sessions, a scope that’s illustrated most dramatically when the spacy sensuality of “Chocolate Hills” leads into the stark spirituality addressed on “Father Father,” a reminder of both acts’ gospel roots. Over a simple rolling guitar figure, Bridges pleads with the heavens—“Look at the mess that I made/Just a man with unclean hands”—only to be reminded of God’s eternal love.

For the members of Khruangbin, one song in particular was indicative of the trust that Bridges put in them. “The song ‘Doris’ is about his grandmother making the transition from this world to the next realm,” says Johnson. “It’s a very somber, very deep record. And when someone places that kind of work into your hands, the last thing you want to do is junk it up, overproduce it, do too much. We treated it with the respect it deserved, and treated Doris with the respect she deserves.”

Significantly, both parties’ musical directions were clearly affected by their time working together. Khruangbin’s most recent album, Mordechai, moved their own vocals much further forward, a change they readily admit was a direct result of working with Bridges. (Their sound also got enough attention that they were tapped for a remix/reinterpretation of a Paul McCartney song for the McCartney III Imagined project.) Meanwhile, since these recordings began, in addition to his genre-defying album Gold-Digger’s Sound, Bridges has put out several other challenging, shared tracks, including work with John Mayer, Lucky Daye, and Jazmine Sullivan.

The initial plan was for Leon Bridges and Khruangbin to release a full album, but Lee believes that things played out for the best. “It’s like a short story instead of a bigger thing,” she says. “And it leaves room to continue having these stories together.”

Texas Moon represents a genuine and rare achievement, with two of the most respected and innovative acts of their generation truly collaborating to create something new. “As far as an essentially instrumental band, these guys are kind of the top for me,” says Bridges. “I’m honored to have been the first singer that they’ve incorporated in their music.”

“It feels really special to me,” says Lee. “It’s not Khruangbin, it’s not Leon, it’s this world we created together.” 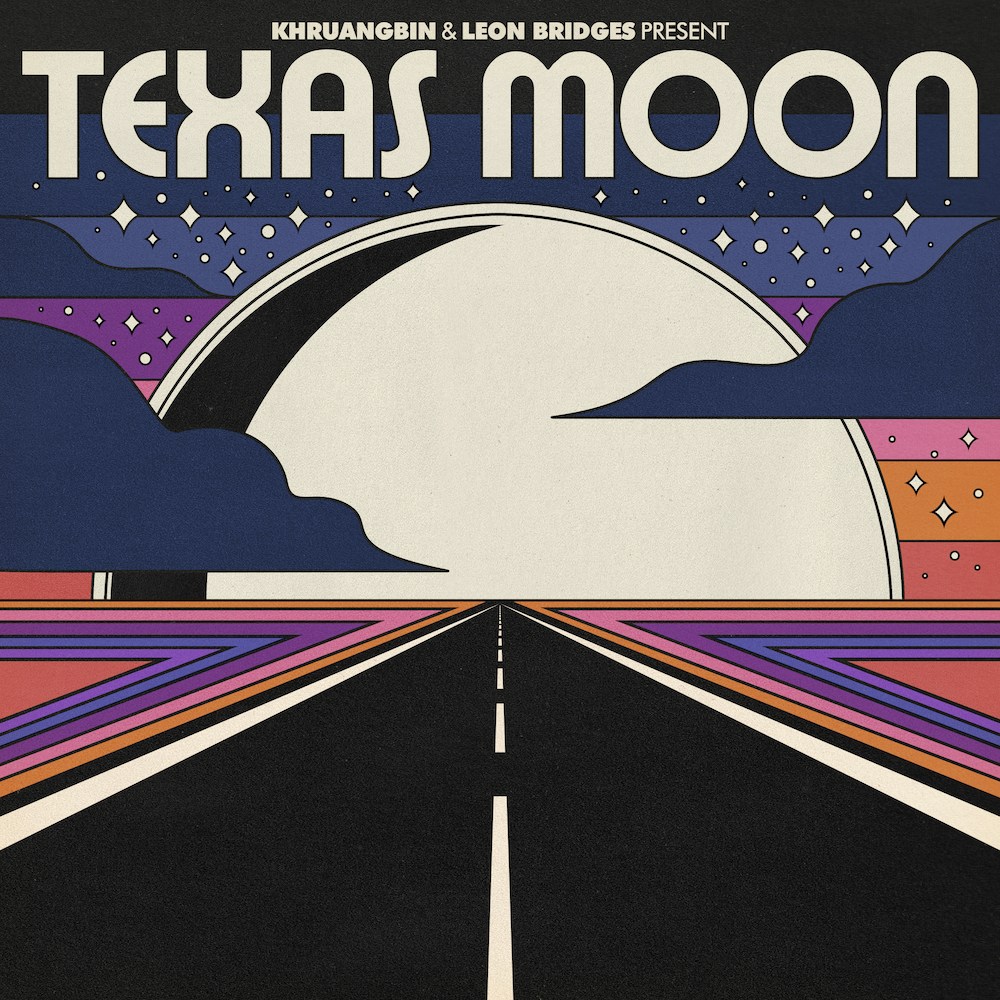 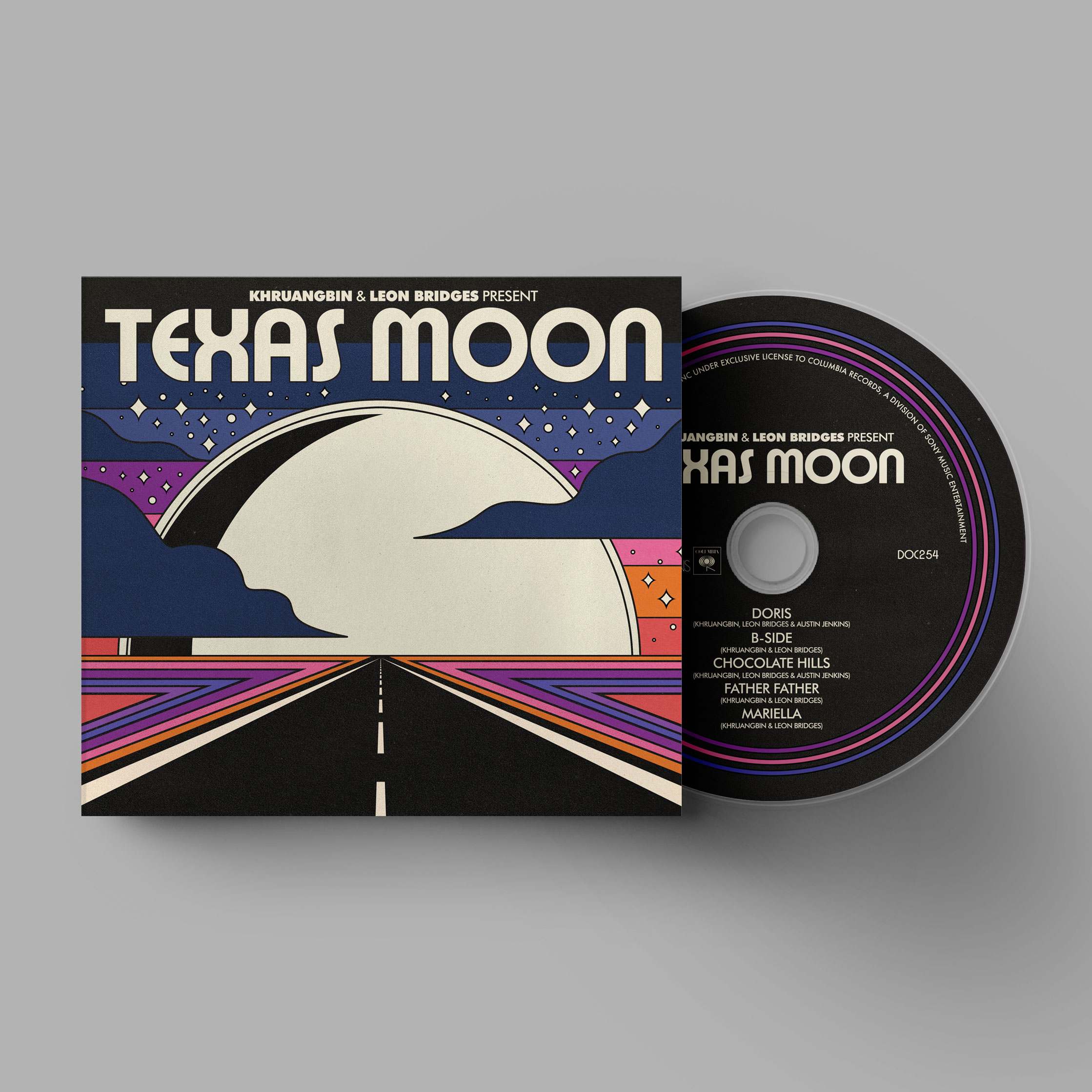 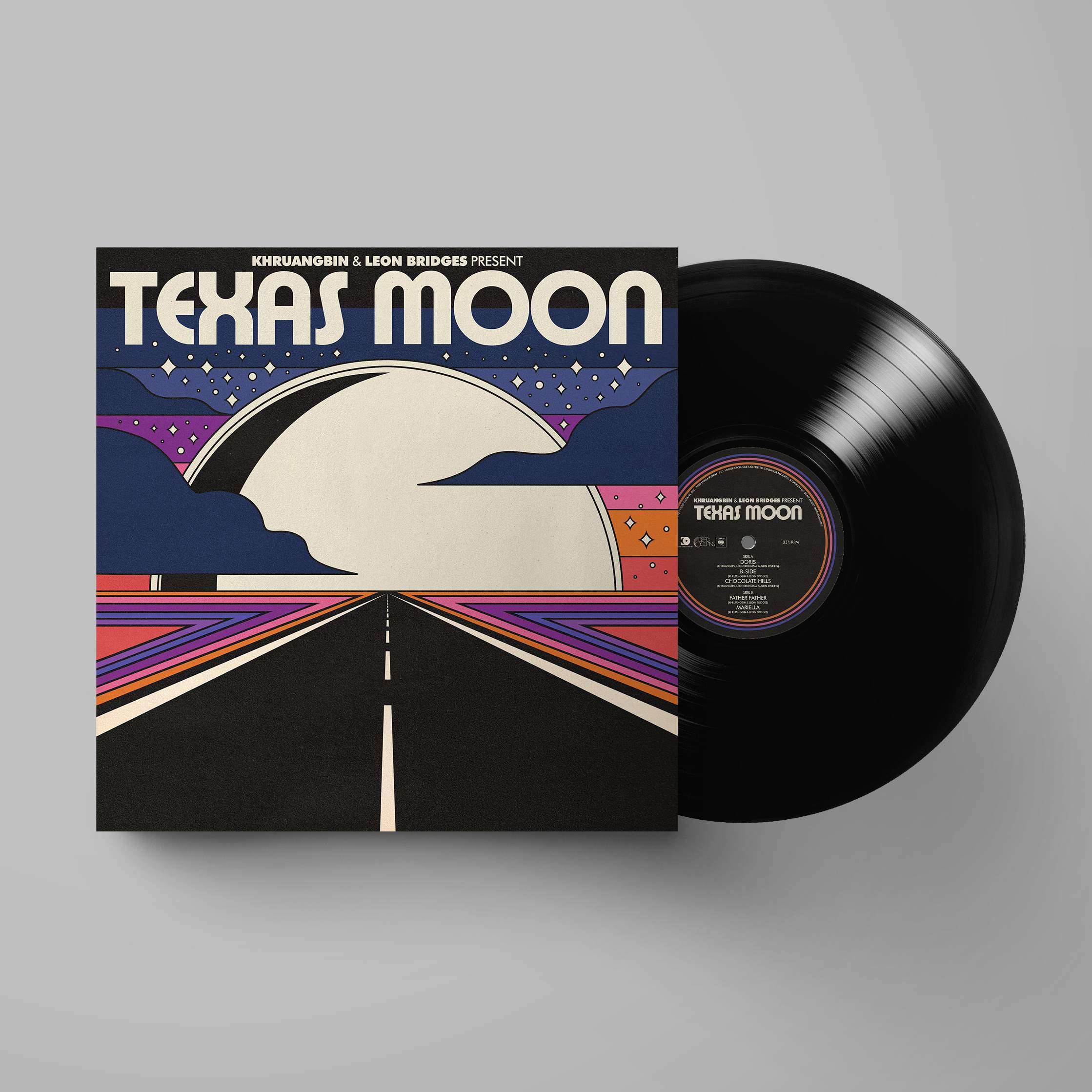 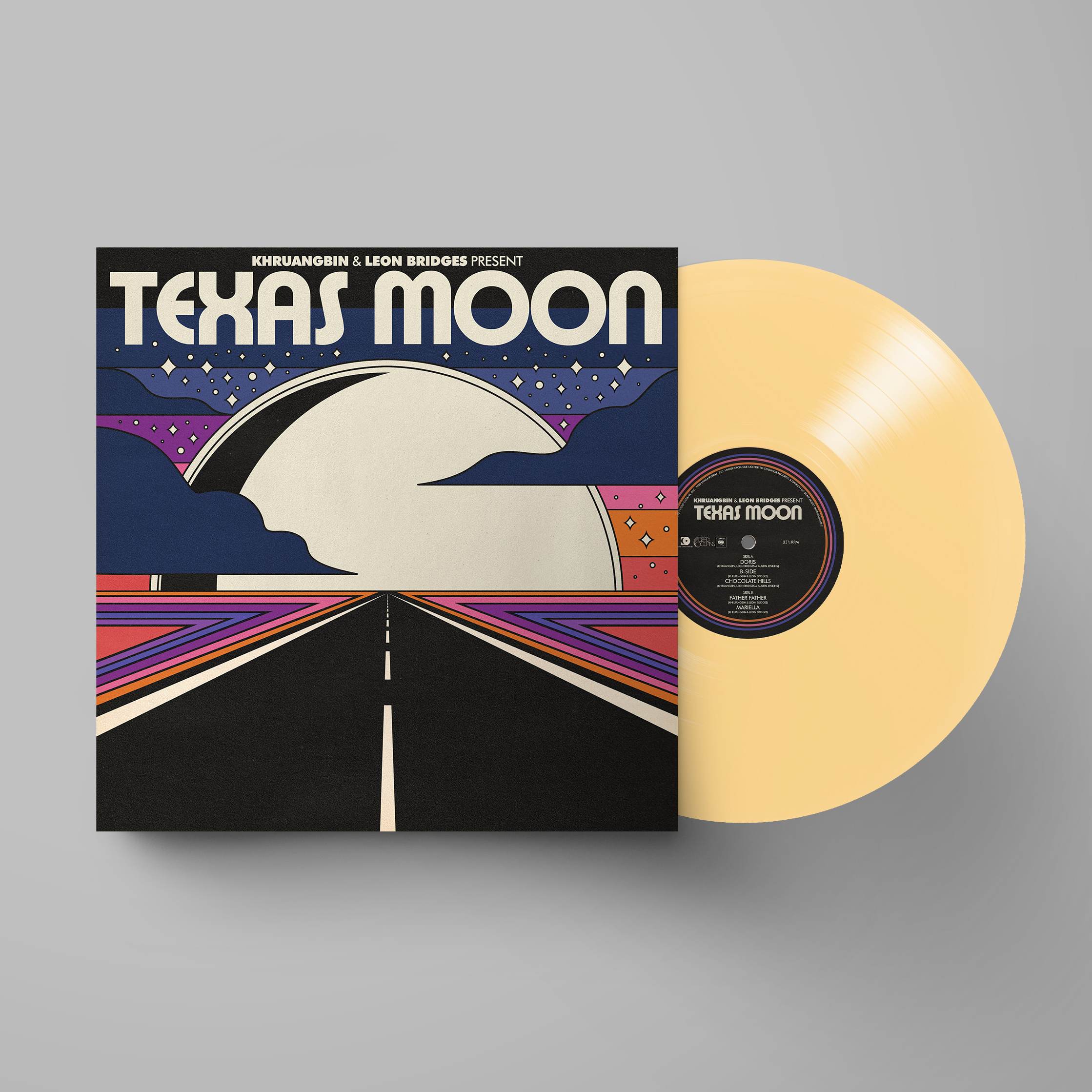 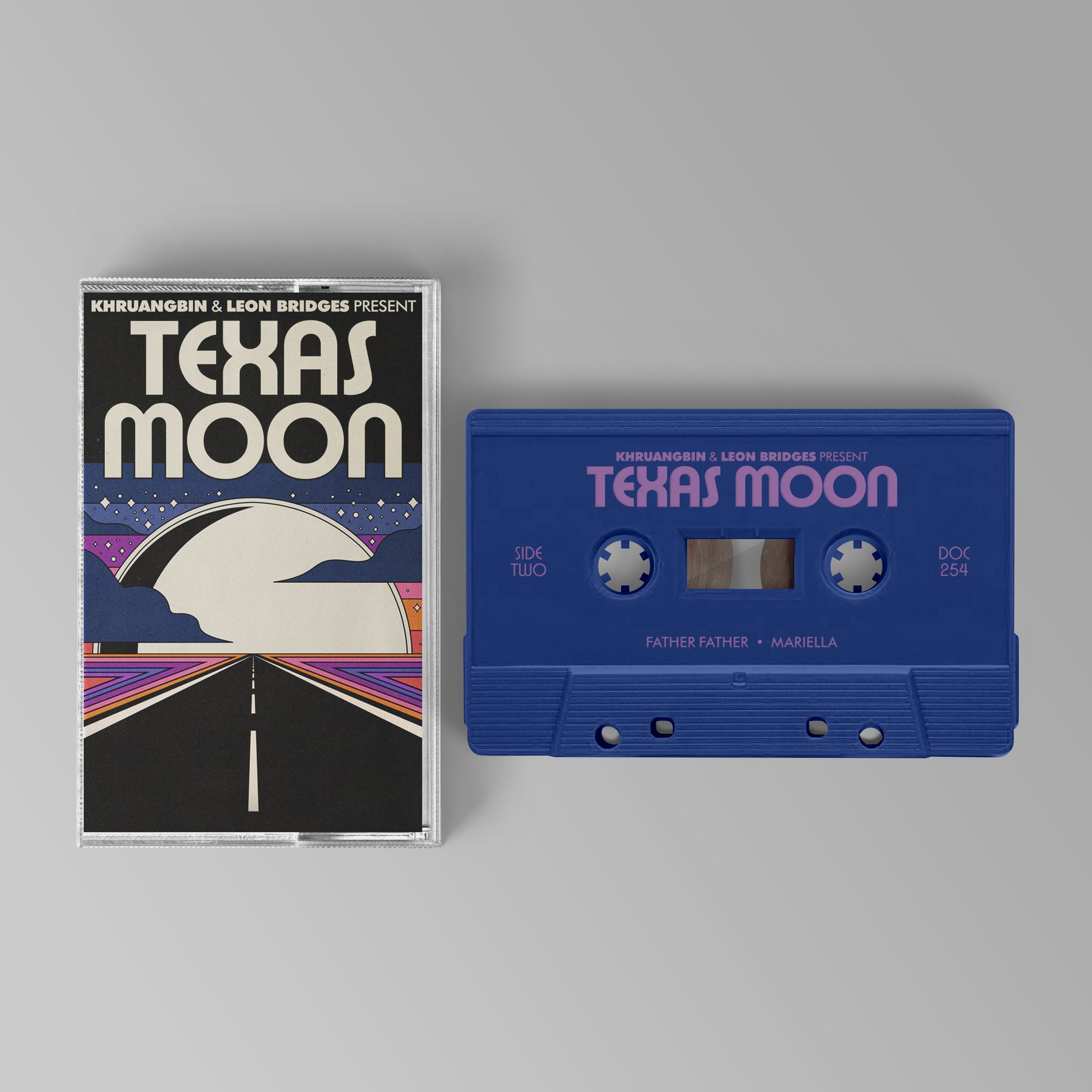 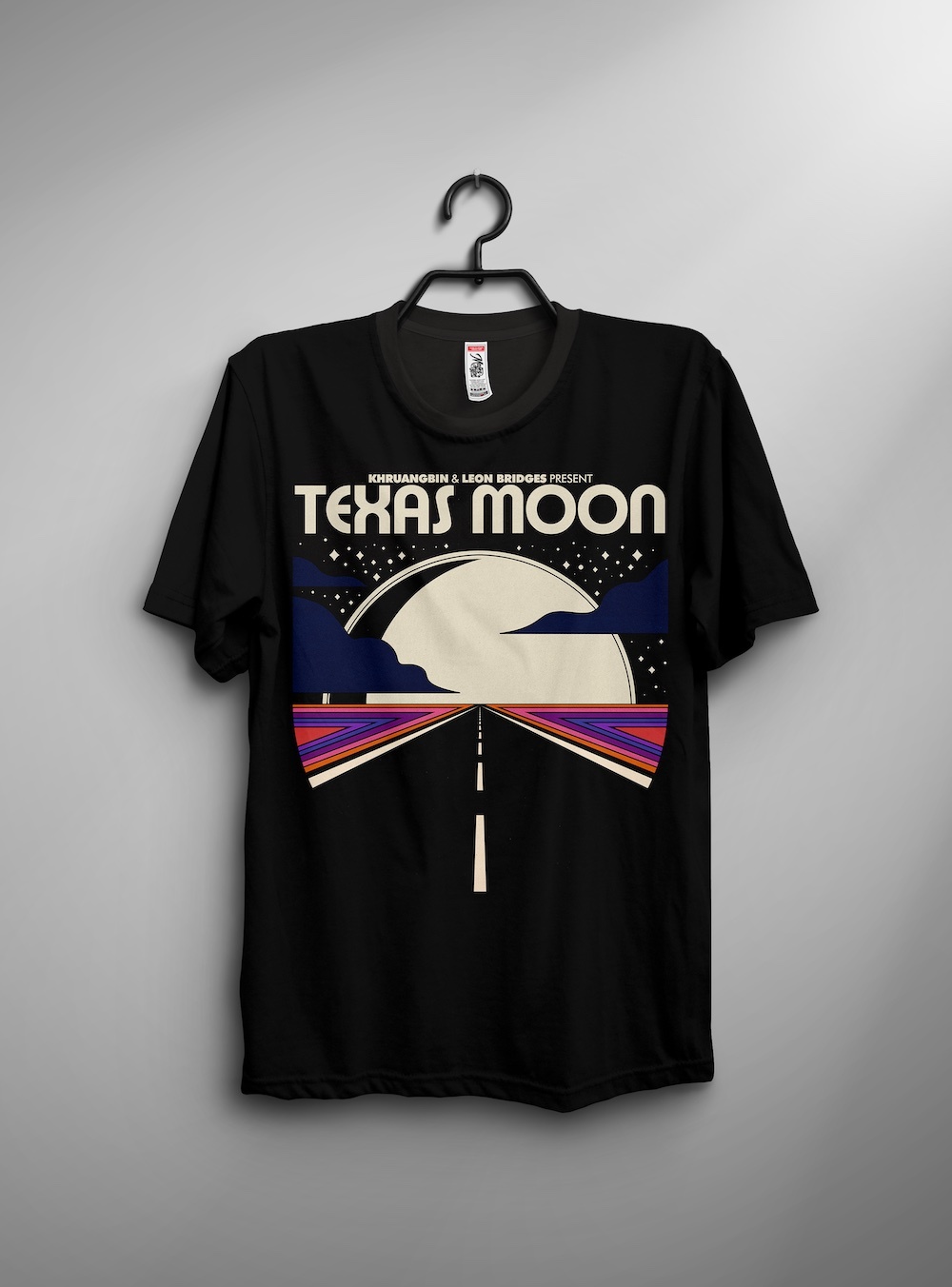