Catalog No: JAG062
Label: Jagjaguwar
Jagjaguwar is excited to reissue Richard Youngs' Advent, Youngs' very first record originally released in 1990 in the vinyl format on Youngs' own No Fans label. Only 300 LPs were released initially. It was then later released on the Table Of The Elements label and quickly went out of print. It became a true underground success story, a critical darling, with Alan Licht, for example, putting it on his "minimal top ten list" in the publication Halana. Simply put, it is an essential work in the body of work of one of the most important modern day progressive minimalists. Includes a new essay by Richard Youngs. "A three-part composition for piano, voice, and ultra-nasty oboe and electric guitar, Advent indicated signs of life in a genre long dormant in the 80s â€˜experimental' scene. It continues the tradition from [Terry Riley's] Reed Streams on down with gusto."-Alan Licht's "Minimal Top Ten List", Halana
read more 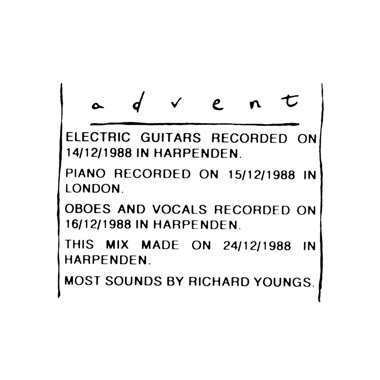