Ears Will Pop & Eyes Will Blink

Catalog No: SCSPEC12
Label: Secretly Canadian
Bodies of Water started in David Metcalf and Meredith Arthur's closet. They were newly married and lived in a very small house. The closet was the only place to put the computer that they used for recording. They eventually formed a musical group to play David's songs. Meredith figured out the piano, and their friends Kyle Gladden and Jessie Conklin learned to play the bass and drums, respectively. In the ensuing years, the four have learned to deftly spin those threads which inevitably weave their way through every Bodies of Water song: ebullient group singing, melodic invention, thundering polyrhythms, and sublime dramatic tension. 'Ears Will Pop & Eyes Will Blink' is their first full-length record, and the first release from the band's own Thousand Tongues label. The songs stray from verse-chorus structure but are engaging and memorably crafted, drawing on an admixture of traditions; the transcendent intensity of gospel, brutish gusto of punk rocking, earnest idiosyncrasy of American folk, sonic inclusiveness of tropicalia, planned jamming of prog, and the sincere bombast of musical theatre. These songs can be likened to a sort of emotional topiary; an unruly living mess lent its shape by the psychic framework around which it grows. Since its inception Bodies of Water have added an auxiliary corps of musicians and when playing in L.A. their ranks can swell to as many as 11; hitting, blaring, strumming and bowing away. The four core members' vocal synchronicity remains the group's hallmark. Their calls, responses, shouts and harmonies ride above and around a retaining wall of sound in a fleeting burst of neo-tent revival immediacy.
read more 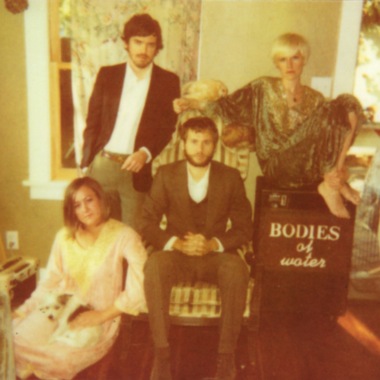