Catalog No: SC097
Label: Secretly Canadian
The Impossible Shapes is a quartet from the southern reaches of Indiana featuring bass/keys-man Aaron Deer, guitarist/bassist Jason Groth, drummer Mark Rice, and songwriter/singer/guitarist/polemicist Chris Barth. Horus is the group's fifth proper full-length album since 2000 and the one that takes the clues and abstractions of all previous and encapsulates them as a monumental and subversive vessel. At point-A we have a classic album from a post-Aquarian world that would be on the electric side of Bert Jansch's Pentangle or Fotheringay. Then from point-B Barth takes a lyrical journey that saunters against the slim lines of magickal romance, demon chasing, Pan, and vile humanistic impulses that reads of equal parts Johann Wolfgang von Goethe and Aleister Crowley. His litanies on discovery and shadowy desires of hedonism and courtly love line each song with a tint of naturalistic folk force and free will. A swell of grandeur appears across this song cycle, morphing out of the delicate hill-side inflected guitar melodies into miniature cathedral celebrations. An association of fellow travelers exists within the songs evoking the ancestral pull of early Pink Floyd and a non-acoustic Incredible String Band changing milk-into-gold with their dark brethren Comus. The wide umbrella of activity outside the Impossible Shapes stretches to each member's participation and full-on rolls in Songs: Ohia/Magnolia Electric Co, The Coke Dares, John Wilkes Booze, Barth's solo persona NormanOak and Deer's solo side Horns of Happiness, though no thinning of blood is found within Horus. The magical spells cast song-by-song grow with each moment that they are set free with every listen.
read more 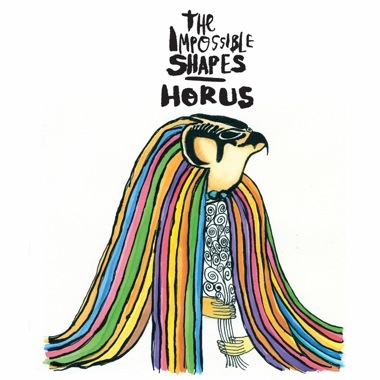